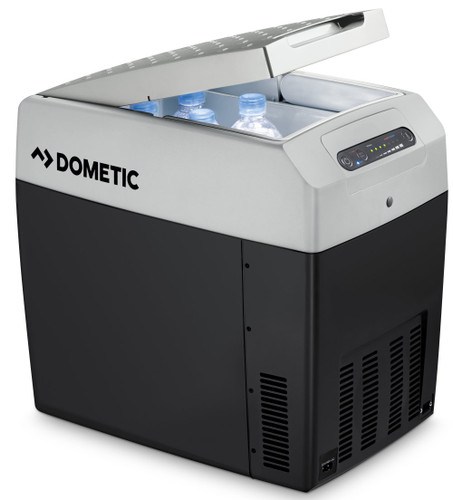 The middle capacity model of the popular trio of 'super' thermoelectric coolboxes from Dometic-WAECO.

The Dometic Waeco TCX21 Tropicool Portable Cooler enjoys the same temperature performance as the TCX14 and TCX35's, cooling right down to 30 deg C below the ambient temperature and heating to 65 deg C.

The Waeco Tropicool TCX21 Cool Box comes with both a 2 metre long UK/Eire 3 pin mains cable and a 2.8 metre long 12/24 volt DC power cable, with cigar lighter style plug. This can be plugged into any suitable powered vehicle socket with at least 4 amps for 12 volts or 3 amps for 24 volts of power available.

Suitable for a weekends camping, boating or caravan or motorhome use, the Waeco Tropicool TCX21 is also terrifically suitable as a Truck Coolbox with the 24 volt operation which is standard and can also keep pre-chilled items perfectly cool for the longest of journeys. Great performance at a great price!

We’re getting orders out ASAP, but be prepared for a 2 to 5 day wait, we expect this to get to 2 to 3 days next week. Our shop in Bromborough is closed, see our blog for updates just click HERE .